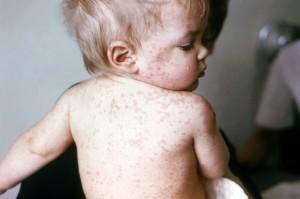 More than 100 cases of measles now confirmed in U.S

More than 100 people in the U.S. have been confirmed as having measles with most of them residing in California. Most of the cases are linked to an outbreak that began at Disneyland in December of 2014 when an infected person from outside the United States visited Disneyland in Anaheim,California between Dec. 15 and Dec. 20.  Most measles patients recover within a few weeks, but it can be fatal in some cases.

The White House Urges Children to be Vaccinated

The White House urged parents take the advice of public health officials and scientists in getting their children vaccinated.

“People should evaluate this for themselves with a bias toward good science and toward the advice of our public health professionals,” President Barack Obama’s spokesman Josh Earnest told reporters.

Earnest said Obama believes decisions about vaccinating children should rest with parents but that “the president believes that everybody should be listening to our public health professionals.” Earnest said the White House will continue to closely monitor the outbreak.

The anti-vaccination movement is based on fears about potential side effects of vaccines, fueled by now-debunked research suggesting a link to autism. But still a small minority of parents are refusing to allow their kids to be inoculated. Other parents are opting out because of religious or other reasons. 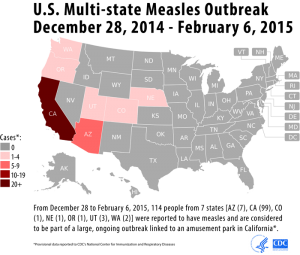 Where the Outbreak is Occurring

The measles were officially declared eliminated in the United States in 2000 after decades of intensive childhood vaccine efforts. But last year the nation had its highest number of measles cases in two decades. Other than California, the measles have been confirmed in Arizona, Colorado, Illinois, Minnesota, Michigan, Nebraska, New York, Oregon, Pennsylvania, South Dakota, Texas, Utah and Washington state, as well as Mexico.

Contact Us (859-525-8181) if you have any questions about the measles outbreak. We would be happy to discuss this with you.